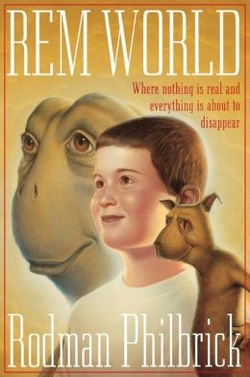 “Biscuit Butt” Arthur Woodbury responds to an ad promising that the user of the REM Sleep Device will miraculously lose weight while he sleeps. Immediately upon receiving the black helmet Arthur retires on a workbench in the basement and begins an incredible journey in which he must save Everything in the universe from the Nothing. In REM world Arthur is surrounded by various creatures eager to help him in his mission. Morf, who can change shape upon demand, acts as his guide through REM world. They all aid in the mission in various ways…the Frog People reveal to Arthur that he is really in two places at once causing the Nothing to enter through a crack in the universe, the giants Grog and Droll act as transportation at various times, the Cloud People teach him to fly in order to be able to enter Vydel’s mouth which will lead him to the River under the World and to the End of the World and Beyond, and Mr. Pockets lends him a boat to get to the island where the demon Vydel lives. Arthur does eventually complete his mission earning him the name of Arthur Courage and he returns safely home. And surprise, surprise…after all that activity, he does lose some weight. This is fast paced adventure with cliffhanger chapters. This fantasy/science fiction enforces the belief that anything can be accomplished if one tries hard enough. The weight problem is never an issue in REM world, but the fact that Arthur was continuously exercising and eating little was evident. Character development and setting were not as developed as they could have been, yet the story was interesting and kept my attention throughout. This is a good choice for middle school readers. 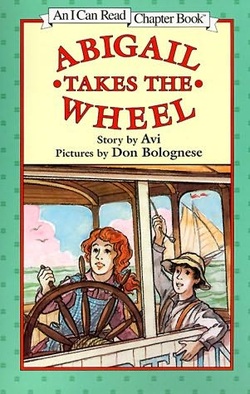 Abigail Takes the Wheel
by Avi

Part of the “An I Can Read” chapter book series this is based on a story from the early 1880’s thought to be factual about a young schoolgirl who must unexpectedly replace the First Mate at the wheel of a small freight boat after he becomes ill. Her father, Captain Bates, takes over the wheel of a sailing ship recently damaged in a collision with another boat and has the ship towed to Pier 42 up the Hudson River. Through rough waters and navigating her route through the busy New York harbor, Abigail manages to deliver the injured sailing ship safely to the pier, along with the help of her younger brother, while still arriving in New York City in time for school. She becomes heroine of the day and is given new rank of Captain Abigail. Written by popular author Avi, the action-packed story is filled with watercolor and line illustrations that add to the drama. It also includes a map showing the 20 mile route Abigail takes from New Jersey to New York. This would be a good choice for readers at about the 2nd grade level.