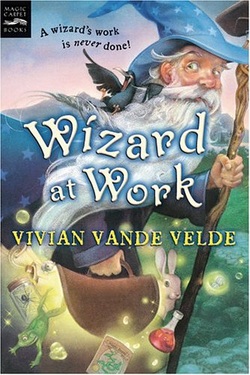 A collection of stories about a young man who runs a school for young wizards throughout the school year and who loves to garden, fish and nap in the summer. This summer, however, is especially busy and he is called upon to help by those requiring the skills of a wizard, and during those times he disguises himself as an old man “as people expected a wizard to look." This book includes 5 stories about the wizard’s work, and what makes them so unique is that they draw upon familiar fairy tales and legends describing parts of those stories we’ve never heard. For example, one story entitled “Beasts on the Rampage” explains how Jack really got those magic beans, and it is not at all how one might expect. It seems that Jack is quite irresponsible and has a bit of a gambling problem. He is trying to concoct some story to tell his mother about where the money has gone that he received after selling their cow Bessie. Meanwhile a pack of adolescent unicorns is terrorizing the village and the wizard is called upon to address the situation. The unicorn’s behavior has gotten so bad that we find out they are making a barbeque of Bessie. During a magic spell to make the unicorns grow older by one year and thus be past this stage of behavior, some residual magic is left on some beans that Jack then steals from the wizard. The reader is left listening to Jack’s tale of how he exchanged Bessie for some magic beans. “Wizard and Ghost” explains just how Loch Ness ends up with a monster, and “The Princess and the Quest for the Golden Cucumbers” tells the story of how the wizard himself fulfills the quest to win the heart of a princess without using any magic. This is a very entertaining book that kids in grades 2-5 are really going to enjoy.