The Secret of Platform 13
by Eva Ibbotson

The newborn Prince is kidnapped from a secret entrance at Platform 13 that opens into a magical kingdom by a wealthy woman who has been unable to have a child of her own. This entrance is only open for nine days every nine years, and as soon as it reopens a rescue team including an invisible giant, an old wizard, a fairy, and a hag travel through to snatch him back. After the most well-laid plans are foiled and mistaken identities are unraveled the true prince is returned to the King and Queen and his rightful home. This fantasy is full of every type of creature that has ever been associated with English, Scandinavian, and Irish folklore making it incredibly magical. The character development is very good matching the equally good story. The illustrations are wonderful too! A good read for middle school children. 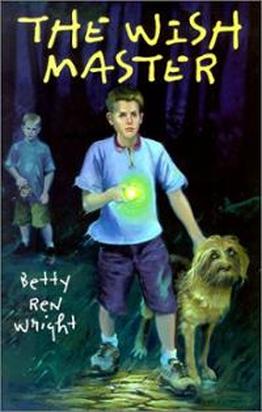 
An adventure story with a hint of the supernatural. When his paternal grandmother falls ill, Corby Hill and his mother travel to the family farm in Berry Hill, WI, leaving his father behind in California, unable to take time off from work. The boy's mom is preoccupied and his grandfather pays little attention to him since he is small, timid, and has no perceivable skills. Then he meets Buck Miller, a bit of a bully with a penchant for adventure. They share exploits and embark on the ultimate adventure, a midnight trek to the Wish Master, whose "body was a rough column of rock covered with strange markings; its head was a mammoth skull-shaped boulder-it-was smiling hideously." After making his wishes, things begin to happen that can only be attributed to the Wish Master - Or can they? This one should appeal to boys in grades 3-5, and is easy-to-read. 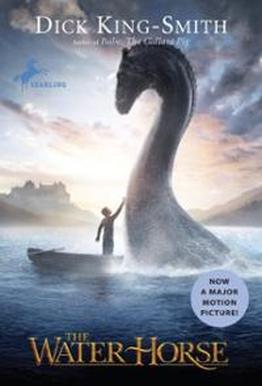 Set in the 1930's, an unusually large mermaid's purse is found along a Scottish shore following a storm by an 8-year old Kirstie. Along with her younger brother Angus, it is carried home and placed in the family bathtub where it hatches the following night. But an unusual creature is born that has the head of a horse, the body of a turtle and the tail of a crocodile. Needing to find a place that would allow the water horse to grow, while still keeping its existence a secret, the children along with their not so grumpy grandfather, Grumble, decide to move it to the family goldfish pond. As it continues to grow, "Crusoe" is coaxed to the loch one winter, "at tortoise speed", by having him crawl somewhat in the manner of a turtle. The only thing that saved this experience from turning into an all day affair was the luck of finding the road covered with ice that the water horse could slide the remainder of the way down. Here Crusoe is taught to come only when his name is called and to remain out of sight all other times. Three years later when the water horse has again outgrown his surroundings the family again coaxes Crusoe out of his loch and is transported, this time by cattle truck. His new home…Loch Ness. This was written by the same author of "Babe: The Gallant Pig". Interesting in that the story is told from the human perspective, as well as through the eyes of the water horse. It is very readable and an enjoyable story about the legend of the Loch Ness monster. The occasional black and white illustrations are just enough to give flavor to the story while still allowing for plenty of imagination. The water horse is shown to be extremely friendly and lovable. This is a heart warming story that just may make you want to travel to Loch Ness to visit Crusoe yourself. This has a fairly high vocabulary, but would be of interest to children in grades 2-5. 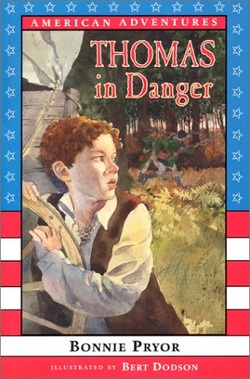 Thomas in Danger
by Bonnie Pryor

Part of the American Adventures series. Thomas, along with his mother, brother, and sister, relocate to Philadelphia to await his father’s return from the Revolutionary War after the Tories and Indians destroy their home in Frontier Pennsylvania. The family begins a new life when they open Peach Tree Inn which takes in and serves meals to soldiers. While serving dessert one evening Thomas recognizes and is recognized by a Tory spy who later kidnaps him. Thomas is taken by wagon train to New York and then left with some Mohawk Indians during the winter. Through it all Thomas looks for a way to escape the Tories and Indians that he hates so deeply. He never manages to and eventually comes to understand the Indians’ way of life. Thomas eventually is left to return home after the Mohawk village evacuates to escape approaching Continental armies. The army finds Thomas and it is assumed that they will return him to Philadelphia. The ending is left open with Thomas thinking that people need to learn to live together and respect each other’s differences. A short explanation of actual events in the book are detailed following the story. Very exciting and believable historical fiction. Black and white line drawings accompany the text which help the reader visualize the action. This is a sequel to Thomas. Good for middle school children. 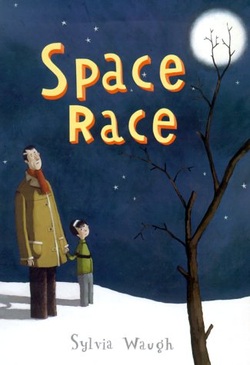 Thomas, 11, and his father, Patrick, have lived a seemingly ordinary existence in the cozy northern English village of Belthorp for 5 years with their next door neighbor Stella working as their nanny/cook. In reality, however, Thomas and Patrick are Tonitheen and Vateelin, aliens from the planet Ormingat sent to Earth on a mission to record the doings of this planet's inhabitants. Thomas has kept a journal of his observations since he first arrived. Now their five-year stint is nearly over, and father and son expect to return to their planet the day after Christmas, even though neither one is happy to leave. On their way to recover their golf-ball-size space ship, stowed in Edinburgh, a dramatic traffic accident separates the pair. Patrick cannot be located and the truck driver involved in the accident is positive that he hit the man in the sheepskin coat. Thomas is left unidentifiable in a hospital, in a state of shock. By the author of The Mennyms. I couldn’t put this book down…Until the final countdown for Tonitheen’s and Vaeelin’s departure back to Ormingat, the ending is hard to predict. Will the pair meet up with each other in time for take-off? Will they decide to stay on Earth? Will Thomas decide to return to Stella and Mickey in Belthorp if his father is not found? Emotions of love, friendship, doubts, and loyalties between family and friends is a strong theme throughout. I consider this to be one of the better science fiction books that I have read, especially in terms of explaining Ormingat science of the workings of the spaceship. The mission on Earth was explained extremely well. I also found it interesting that the religious references made by the Ormingatites were similar to what an Earthling might use, for example about God and having faith. The attention to detail is evident and the story is plausible. Good for grades 4-6. 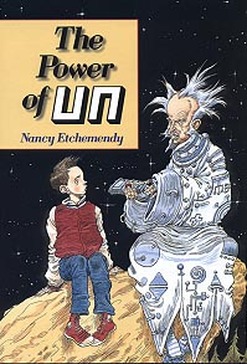 The Power of UN
by Nancy Etchemendy

This is a science fiction story about middle schooler Gib Finney who has just had the worst day of his life. He has been in fights with schoolmates, his science experiment went poorly, and his sister’s babysitter has canceled requiring he and his best friend Ash to take her with them to the carnival that night. He is given an “Unner” that evening by a strange man who looks like he might be from the future. An Unner is used to do things over…like if you make a horrible mistake, it can be undone by the Unner and the user is given the chance to redo it...just like on a computer. But Gib is given very little instruction on how to use the strange device and only knows that it is very important that he take it with him that night to the carnival. Unfortunately, he drops it in the woods on his way home and it has become too dark for him to find it again. Very well done science fiction that explores more than just time travel. All the details are woven together perfectly to make a believable story. Fast paced and full of emotion and anticipation. The ending is not what you would expect. Middle school readers will enjoy this one. 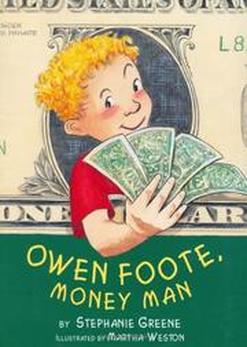 Owen desperately needs money in order to purchase some life essentials from the “Junk You Never Knew About” catalogue such as plastic vomit and dog poop. Getting money is the problem. His toilet demonstration business proves to be fruitless almost immediately and the attempt to make a best-selling fishing video becomes hazardous as Owen hooks his own ear with the hook. Allowance is out of the question since his parents have this cockeyed idea that not only should he should earn it, but he should probably be expected to do chores simply because he was part of the family! He informs his father that he will rake leaves at a rate of a penny a leaf. “Twenty dollars for one pile of leaves?” said Mr. Foote. “Is that a bargain?” “It’s a big pile,” said Owen. “I know it is, Owen. I raked it,” said his dad. Then Mr. White, Owen’s neighbor, asks for some advise on building a pond as a surprise for his wife. Owen has quite a bit of knowledge on the subject and heads out with his book about ponds to help Mr. White. If there’s one thing about Owen, he knows a lot of stuff. They work together to successfully complete the pond project and Owen, to his surprise, is paid $20. This book is extremely well-written. Its’ fast-paced, realistic style will be a hit with young readers and the dialogue is something one would imagine occurring in their own home. There are lessons to be learned but it is not didactic. In fact, although there is some change in Owen’s behavior by the end of the story, there is still room for improvement. For example, when he finally agrees to clean his room in exchange for his allowance, he ties up his “treasures” from the floor in his sweatshirt and stuffs it all in a drawer. There are three other “Owen” titles in our collection just in case you enjoy this one. Good for grades 2-4. 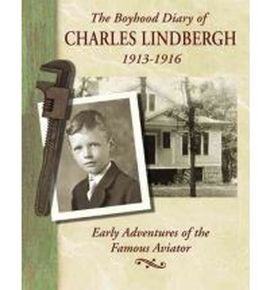 The Boyhood Diary of Charles Lindbergh
edited by Megan O'Hara

This book presents excerpts from American aviator Charles Lindbergh's diary that he kept from age eleven to fourteen and includes childhood photos of him as well as information on life in midwest America during the early twentieth century. His entries detail passenger train travel, camping along the Mississippi River, and an automobile trip around rural Minnesota. It is supplemented by sidebars, activities, and a timeline of the era. My one complaint about this very complete book is that the print is very small. The information provided, however, is something that is not available in the other Lindbergh books we own. It will probably be of interest to middle school kids to read Lindbergh’s own diary and to get that additional information about this interesting historical figure. The photos are excellent and the additional sidebars on things such as tracking animal prints and starting your own diary make this a worthy biography. It is a thin book, only 32 pages, but with a fairly high vocabulary.