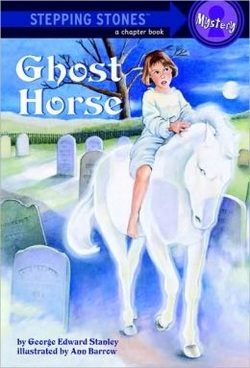 Emily Clark moves to a new town and begins to attend a new school. In order to fit in, she tells the kids in her class that her parents have bought her a horse rather than a bicycle, which seems to be the norm in this town. Well, she did have a horse visit her on her first night didn’t she? She didn’t have to mention that it appeared to be a ghost horse. When the ghost horse continues to visit her at night Emily realizes that it is trying to tell her something and she sets out to discover the mystery. With the help of her new friend Julie, the two discover that the horse is trying to locate its owner from long ago. A good story with situations that include peer pressure, lying and moving that kids can relate to. The black and while line drawings are a very good accompaniment to the text. This book would appeal to children in grades 2-4.

Bug Muldoon: the Garden of Fear
by Paul Shipton

Bug Muldoon, a beetle private investigator, is hired by the ants to check out some oddities in the colony. In particular he is to follow an ant by the name of Clarissa who can be identified by the white spot on her head. Apparently some of the ants have become “individualists” who it is believed are not working for the good of the nest. And while it is true, Bug discovers, that some ants were sprayed by the Man’s repellant causing them to now pursue individual hobbies, something even stranger is going on in the garden. Between Bug Muldoon and a news reporter grasshopper by the name of Velma, the secrets are uncovered. A cast of characters is introduced from “Shaky Jake”, a housefly with a sugar addiction, Eddy the earwig who has gone missing, Krag, the commander of the ant colony, Billy, a caterpillar who dreams of becoming a detective one day, Dex and Dax, a set of worms that used to be one, Leopold the ant who has discovered his poetic abilities, and Clarissa the ant who has discovered her beautiful voice. This is a mystery set in the garden behind one man’s house that will entertain middle school kids as they follow Bug’s adventures of solving his case. The battle between the ants and the wasps and the rest of the insects is the climax that will have readers rooting for our hero. An epilogue at the back of the book allows kids to see how the insect characters end up following the battle. Finding out that Billy the caterpillar has become a beautiful butterfly is a nice touch at the ending. The plot is well developed and the characters are interesting. Bug Muldoon adds humor and, of course, uses the typical detective cadence in his speech. And, there is a hint of romantic interest between Bug and Velma. 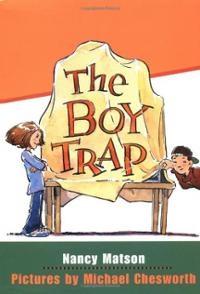 The Boy Trap
by Nancy Matson

When the science fair is announced to the fifth grade at Kennedy Elementary, Emma decides to prove scientifically that girls are superior to boys. Her aunt Marion advises her on scientific method and being objective, but after conducting experiments on things like politeness and good grades she is having a hard time proving her hypothesis. To make matters worse two boys team up to prove that boys are superior to girls, and Kennedy Elementary becomes a divided population of kids not speaking to each other and generally leads to a gender war. Working with her best friend Louise and joining efforts with the boys, the four still have inconclusive results and agree that the gender of the Young Inventors Contest winner will determine the superior gender for their project. An unusual number of participants enter the Young Inventors Contest attempting to win and get their gender deemed the superior. Humorous story with real-life situations including some fifth-grade crushes. This would be a good story to read prior to a science fair since research methods and ethics and consequences of inaccurate reporting are discussed. How the science fair project dilemma will be resolved remains a mystery until the last pages. Accompanying illustrations are pretty comical and add to the story. Middle school readers will enjoy this one.