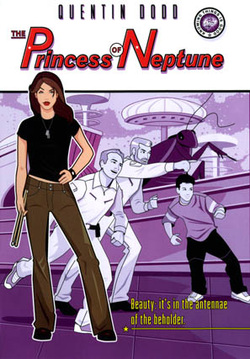 The Princess of Neptune
by Quentin Dodd

Imagine being kidnapped by a giant cockroach from the Moon, who runs the local Burger Buckaroo in disguise, to take part in the Cavalcade of Loveliness Beauty Pageant on the planet Neptune. Imagine that the talent portion requires you to capture the Beast of the Mall, which turns out to be a giant plant named Claude. Then imagine that your science teacher from school, who had the students take care of his cacti, turns out to be a misguided alien seeking revenge by brainwashing everyone attending the pageant while he impersonates the most famous Moon Cockroach Pop-Star, Hortense Benway. This is what happens to our hero Theora, a teenage punk-rock drummer who was out by the lake one day working on a science project, when she and her pesky little brother witness a submarine rising out the lake owned by the Ubermind Institute and operated by the famous scientists who publish bestselling books about their adventures. The Cavalcade of Loveliness Battle of the Bands, between the real Hortense Benway and her back-up punk-rock Band with No Name and the imposter Mr. Pinweed with his Big Band of Cactuses, is the grand finale to this fast-paced story that is chock-full of adventures and plot twists. This would be a good follow up for fans of Captain Underpants and other humorous books. It is fun and kids will get a laugh from this science fiction that is sillier than science would allow. 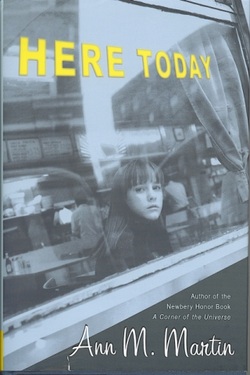 Set in 1963, this story follows 6th grader Eleanor Roosevelt Dingman through her daily associations with family, school, and neighborhood. She lives in a neighborhood on Witch Tree Lane where “Bad Things” happen. The close neighbors include a Jewish family, a French family, 2 older women affectionately known as “The Ladies” who live together (and they aren’t even sisters!), the weird messy family run by a single mother, and the Dingmans. Eleanor’s mother, Doris, is a selfish, self-centered character more preoccupied with becoming a star or model in the small town of Spectacular, NY than cooking or taking care of her three children. At school, Eleanor and her best friend Holly, from the neighborhood, are outcasts. Beginning slowly, the first part of the book follows Doris’ adventures as she models for a local department store and arranges to become the Harvest Queen in the local parade. At school, Eleanor and Holly are being harassed by the rest of their class as they are continually slammed into lockers and onto the floor or into desks. The neighborhood, too, is being plagued by “Bad Things”. The Witch Tree is painted, mailboxes are bashed, rocks are thrown through windows, and Pumpkin, the neighborhood cat, is poisoned. Then President Kennedy is assassinated and the school and neighborhood are thrown into a tailspin. Holly and Eleanor wonder if the slamming will now stop since bigger concerns are evident. The book was slow starting but it ended up being a satisfying read. The characters were realistic as were the situations. Middle School girls will identify with Eleanor and Holly as they struggle through school.