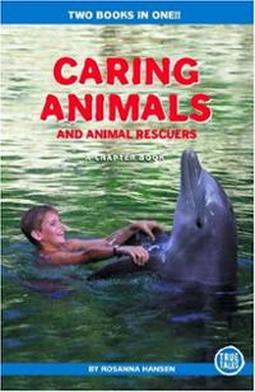 The first part of this non-fiction book is about caring animals and tells the stories of four different animals that have specific jobs helping people who cannot help themselves. These include Endal, an assistance dog who lives with a paralyzed man, Cuddles the guide horse that helps a blind man, Gizmo the monkey who also helps a paralyzed man, and the dolphin Duke who works with disabled children needing physical therapy. The second part of the book tells the stories of four animal rescuers. The first story tells of a dog named Ginny that rescues stray cats. The second is the story of Scarlett the cat, who rescued her kittens from a burning building. The third is about LuLu the pot-bellied pig who ran to get help when her owner was having a heart attack. The fourth tells of Salty the dog who guided his blind master out of one of the Twin Towers prior to its collapse. This book is full of color illustrations that kids will pore over. It’s a great choice for the animal lovers in grades K-5. 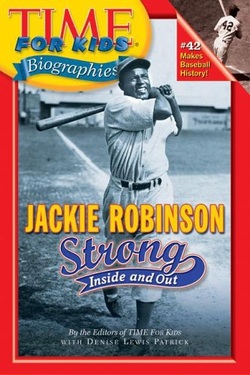 Jackie Robinson: Strong Inside and Out
by editors of TIME for Kids

This is a biography in the “TIME for Kids Biographies” series that also includes biographies of Harriet Tubman, John F. Kennedy, and Theodore Roosevelt. Intended for children ages 7-9, this biography is organized into chapters and includes a timeline of Jackie Robinson’s life. It includes many photographs (mostly black and white due to the time period discussed) that are identified with easy-to-read captions. This is a very readable biography full of interesting details of Jackie Robinson’s life from childhood until his death, emphasizing his baseball career and it’s effect allowing colored people to play on the white leagues and encouraging African Americans to fight for equal rights.